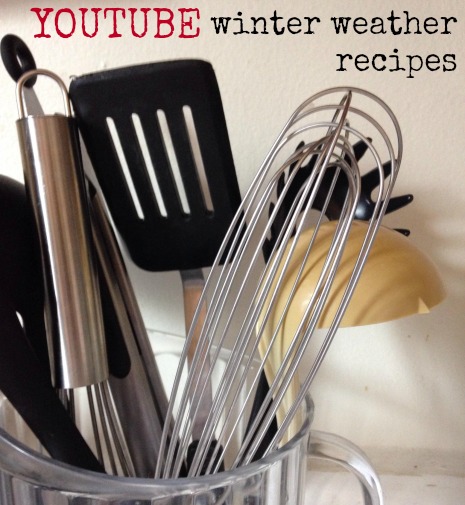 Now that we’ve had the pleasure of “falling back” and the sun is pretty much clocking out at the same time as I am, I’m all about hunkering down at home during the evenings with a warm meal. This Fall I’ve been on a pretty consistent dinner rotation of tomato soup, jacket potatoes and warm sandwiches. In an effort to spice things up a bit, I turned to YouTube for some inspiration. I’m ready to tackle Winter head on! (Is that snow outside? ARRGHH!) When it comes to recipes I want simple, affordable, and quick. I’m usually only cooking for 1 or 2 so I want bigger batch recipes to hold up as great bring-to-work lunch options. So, with Winter on it’s way into town, I bring you 11 recipes to try. Enjoy!

Healthier Banana Bread by Light by Coco. My sister once told me that the best present to take when you’re visiting your significant other’s parents is a loaf of banana bread because that way, as they’re slicing it up the next morning for breakfast, they’ll think about how much they like you. I have no idea where she got that nugget of knowledge from. (Katie?) Anyways, maybe the magic of banana bread works in other ways too. Like if you bake this up for a weekend breakfast you’ll remember how much you love YOURSELF when you have some leftover slices for snacks all week long. Also, great way to use up those over-ripe lingerers.

Overnight Oatmeal (5 Ways) by The Domestic Geek.  I’m a fairly recent convert to overnight oats. I eat straight up, hot oats (with various spices and nut butter mixed in) pretty much all the time. In fact, I went 2 whole years where I ate them for breakfast every single day unless I was eating breakfast out. They’re cheap, filling and I just love them. BUTTT, in this Instagram-age, I also enjoy aesthetics. So a meal that gets made right in a Mason jar? I can be game for that. Not to mention, this version of oats is much more portable and is great if you’re running out the door and need to eat breakfast at your desk while you’re checking your e-mails.

Curried Rice Salad by The One Pot Chef.  Maybe because The One Pot Chef is Australian but this definitely looks like something the cast of McLeod’s Daughters would chow down on. Perhaps Meg would whip it up for Terry after surfing for recipes on the web. Or maybe Tess used to make it in the big city and now has Jodi hooked on the stuff. Either way…SULTANAS! A good arvo meal if you ask me, mate. (If you’ve never seen McLeod’s Daughters that’s not my problem. IT IS YOURS.)

Veggie Oriental Noodles with Peanut Sauce by Joanna Soh. I have a bunch of friends who SWEAR by their vegetable spiral slicers…and not just the weird paleo friends. I like that this recipe doesn’t completely substitute veggies for noodles but uses both spiral cut vegetables AND soba noodles. If I was bumming about being at work for 4 more hours, seeing this colorful salad in my lunchbox would definitely cheer me up! Almost as much as listening to Joanna Soh’s Malaysian-British accent!

Broccoli and Arugula Soup by Gwyneth Paltrow. I’ve only tried this soup during my forays into Gwyneth Paltrow cleanses so I have no idea if my perceptions of taste were totally skewed but I thought it was AWESOME. The arugula made it really pepper-y and I always forget how much I like broccoli until I’m forced to eat it. I have a feeling this soup would warm you up and brighten your day…even if you weren’t already starving. I know I’ve mentioned it before but don’t hate on Gwynnie!

Slow Cooker Chicken & Vegetable Coconut Curry by Sarah Fit. I’m a little crock-pot obsessed. And honestly, if you’re a working guy or gal and you’re NOT crock-pot obsessed than you need to get with the program. Fix everything up and leave it on all day while you’re away and dinner is waiting for you! Especially in the Winter, I want to limit my trips out into the cold. Suiting and booting up for Indian take-out? Not necessary. Leave it in the crock and FUHGETTABOUTIT.

Real Food Quiche by Lisa Leake.  I know I talk about breakfast for dinner a lot but YOU SHOULD HAVE BREAKFAST FOR DINNER. Once a week. Make it a thing. Rituals are awesome. Ok, ok, broken record over here. Quiche is a really easy meal to have in your repertoire and is a great excuse to turn that oven on for some extra warmth in your kitchen. Full disclosure: I’m WAY too lazy to make my own crust and typically just go the store-bought route but this video DOES make it look pretty easy to DIY. Maybe because a TINY CHILD MAKES IT! Oh, Lisa Leake you tricky trickster. We get it! Cooking is easy!

Vegan Chili by She’s So Mickey. I definitely crave big bowls of chili served with cornbread in the winter. While normally I would go the slow cooker route, this vegan chili is so simple the YouTuber explains how to make it in 60 seconds! Great for all my vegan sistahs out there…but really for anyone. Also, if you have a super hectic week this Winter and money is tight, may I recommend She’s So Mickey’s 21 Meals for $40 Part 1 OR Part 2. These would be super helpful for my babes in college or grad school.

5-Minute Whole Wheat Naan by Ashley (never) Homemaker.  Not the greatest video but Ashley’s blog is one of my very favorite’s for recipe inspiration…and naan is delicious. Because you know what you need in the Winter? CARBS! (At least I do.)

Chocolate Souffle by Lo Bosworth.  Did you ever think when you were binge watching The Hills (for the second time) that Lo would go to culinary school in New York? I certainly didn’t. While her cohort L.C. has made quite the fame-fame name for herself in the ~*~Lifestyle~*~ world, I kinda prefer Lo’s IDGAF video tutorial approach. These souffles would be the perfect addition to an at-home date night. Pair with super full glasses of red wine, a cozy throw blanket and your worn copy of “When Harry Met Sally.”

Pumpkin Pie by Leanne Brown.  Maybe it’s because I’m an October baby but pumpkin pie is one of my all time favorite desserts! And BONUS it is pretty easy to make. Here, my cooking on the cheaps guru shows us how it’s done. Don’t you just love her???

Alright y’all, I hope you’re inspired to cook at home this Winter…or at least to sit in your pj’s and watch tons and tons of cooking tutorials on YouTube! What’s your favorite dish to make in the Winter? Do you have a go-to YouTube channel for yummy recipes? Let me know in the comments below!