What are you up to this week, loves? Chet and I did our Christmas shopping early on Saturday, when stores were less crowded, and celebrated our success with lunch at a favorite Mexican restaurant. Do you still have gifts to gather? Here are my gift guides so far, if you need some ideas! Have a wonderful Wednesday, and here are some links…

Getting Hygge with it gifts.

How brothers and sisters shape who we are.

The comfiest slipper. (That bow!)

We love the 90s gift guide.

Some new Trader Joe’s items to add to your holiday pantry.

A t-shirt celebration of female voices in film. Which would you choose? This is my pick.

A brief encounter that changed the lives of two young refugees.

[Related: Ballet nerds like me (I’ve danced Chinese Tea before!), might find this information re: choreography interesting.]

There’s only one good way to email your boss! (Freelancers: Totally works for clients, too!)

P.S. Here’s the link to my 2018 GIFT GUIDES one more time, just in case you wanna keep browsing.

“Wild: From Lost to Found on the Pacific Crest Trail” by Cheryl Strayed is the story of one woman on two concurrent journeys–forging a path through her own grief towards healing, acceptance and self-forgiveness as well as blazing the physical Pacific Crest Trail on an eleven-hundred mile solo hike. As mentioned before in our little virtual book club, I initially heard about this travel memoir on one of my favorite radio programs and felt reading it was of the utmost importance after stumbling upon Vanessa Veselka’s essay about the lack of female road narratives and why it matters.

For the last year or so, admittedly, I’ve been pretty obsessed with the idea of long-distance hiking, spending hours researching various trails and reading books and blogs about those who have made these trips.

Suddenly, reading Veselka’s essay made me put 2 and 2 together–there were and ARE women out there who are going on magnificent journeys! They are walking from Georgia to Maine, from the Mexican border to the Canadian, they’re seeing our country in new ways, they are heroic and SOMETIMES–they are doing all of this ALONE. Strayed does not spend time justifying her ability or right to tell this story. She just tells it.

Whether you relate to the physical pain she endures; carrying her huge backpack lovingly nicknamed “Monster” and doctoring banged up feet from ill-fitting boots, or her emotional pain; the death of her mother and the end of her marriage–there are moments of palpable empathy throughout.

Do not let the fact that this book is so heavily touted by Oprah (it is emblazoned with her Obrah Book Club sticker/seal of approval) dissuade you. Oprah knows what’s up and this is no Nicholas Sparks feel-good novela. Instead, it is an honest depiction of a normal woman who went from “lost” to “found.”

Strayed doesn’t leave anything out when painting you a picture of herself as “lost.” Even though this depiction is far from from flattering. This candid portrait of Strayed’s miserable life reminds me of a part I played in college forensics, a woman on the road who put it very simply,

“When you’re laying face down on the ground there’s nowhere left to fall.”

Strayed hit rock bottom. There was no place left to climb but out. 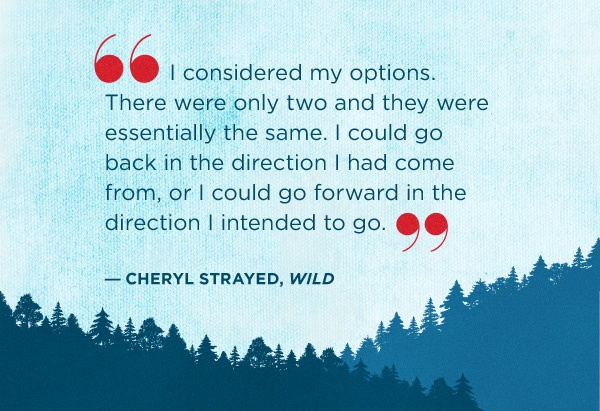 I truly believe this book is a great introductory read for anyone who is seeking out female road narratives. We’ve demonstrated over the last 3 weeks that stories like this one are hard to find. Reading it will hopefully reveal how women on their own and on the road can have a place in not only our literature but our cultural landscape, too.

In her essay, Veselka argues, “True quest is about agency.” Meaning, when we relegate women’s journeys to mistakes, escape or a plot twist only to end in tragedy, we are robbing them of just that. Instead, we need to afford women the possibility and ability to tell stories like Strayed’s.

…So I read. I go on adventures. And I encourage you to do the same.

Thank you so much for participating in this inaugural virtual book club on Finding Delight. I loved discussing everything with you and hope you felt just the teensiest bit inspired! I hope to do it again real soon. : )