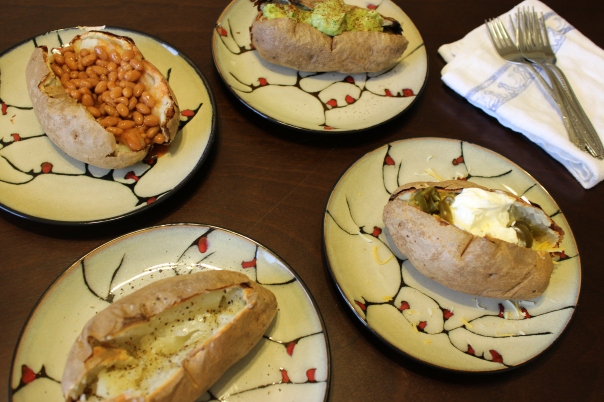 A couple months ago, I had one of those brainfarts where you can picture what you’re trying to say but you can’t quite remember what the thing you’re picturing is called. Hot potatoes? No. Oven potatoes? No… I settled on jacket potatoes because that’s what they were called in Ireland and I’m STICKING. TO. IT. (Baked potatoes for Americans. D’uh.) Crispy skin, fluffy inside, and topped with just about anything you have on hand. If you’re looking for a drive-thru busting meal, pop one of these bad boys in the oven (straight on the rack) at 400F and forget about it for the next hour or two. Some of my most recent favorite toppings are pictured above–

If you’re serving several folks for dinner, whack a whole bunch in the oven and when it’s time to eat, set out options so everyone can top to taste. Super easy and goes well with other snacky foods like crudites and baguettes with jam. YUM! 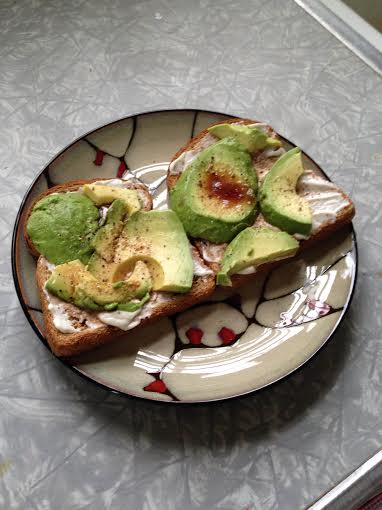 This recipe is inspired by the crayest health-guru of them all–Gwyneth Paltrow–with a few modifications by yours truly. This is literally the easiest thing you can make from her cookbook “It’s All Good” and I’m not exaggerating when I say it is crazy delicious. Let’s let Gwyneth wax poetic for a second:

“…but really it’s the holy trinity of Vegenaise, avocado, and salt that makes this like a favorite pair of jeans…”

What a lovable weirdo. And aren’t you intrigued??? Let’s get to it!

whole-grain bread, preferably with some seeds in it to add a little extra crunch

Vegenaise, I know it sounds crazy but just trust me

avocado, I usually use ½ for 2 slices of toast but you do you

Pop two slices of bread in the toaster. Slice your avocado. When the bread is toasted, spread it with some Vegenaise (Personally, I do not care for actual mayonnaise but I really like the vegan version so I can’t speak to whether this recipe would be good with the real stuff. If you’re inclined to give it a go than by all means…Gwyneth would not be as forgiving as I). Layer the avocado slices on top making sure to smoosh them down with your fingers a bit so they get down into the crunch of the bread. ; ) Pour a little balsamic vinegar over top. Crack pepper over everything. Sprinkle just a pinch of some pink Himalayan sea salt on the avocados. Voila!

What’s fantastic about putting things on toast as your go-to fast-food meal is you can pair with whatever you have in your fridge to round it out. This toast goes great with fruit salad, scrambled eggs, yogurt, chips and salsa, salad, steamed veggies–pretty much anything your little heart desires. Oh, and if you try it and love it? I told you so and you’re welcome. 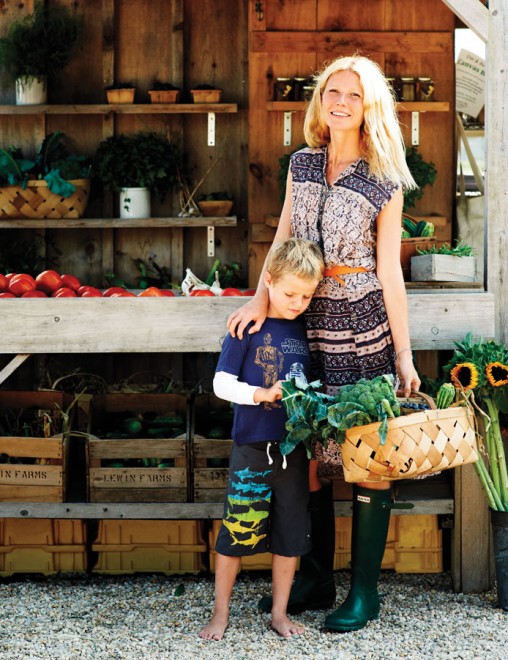 Strangely, the star everyone loves to hate, I just love to love. Now, I recognize that most of what comes out of her mouth is ridiculous, and sure that’s annoying and would be a little obnoxious if the food she was talking about wasn’t so damn good. Gwyneth is a big believer of a clean, no processed foods, whole-food approach.

Her website Goop and her cookbooks focus a lot on finding ways to make clean eating more tasty. And guess what? She succeeds…because she’s bougie enough to not give a crap about pumping a bunch of money into making brownies without sugar taste legit or the precise spice chemistry to make stir-fry with basically nothing appetizing in it at alllll taste like take-out.

Gwyneth is passionate about food in the same way all of y’all are who post your meals on Instagram. The only difference is she is rich and famous so instead of throwing a filter on lunch she hires people to help create, blog about and write a cookbook for it. Cut a bitch some slack.

Now these assertions do not come without experience. I have done the cleanse she writes about on Goop … twice. (I feel obnoxious just typing that but I was curious!) I renewed It’s All Good: Delicious, Easy Recipes That Will Make You Look Good and Feel Great three times before returning it to the library.

Honestly, I think the absurdity of Gwyneth’s recipe-prose and the absolute un-relatability of her recommendations increased the appeal for me. Give me a dash of celebrity humor with a bangin’ smoothie recipe any day. Entice me to try cooking something so insane that I have to text someone about it when it turns out delicious–and I’m yours for life.

Obviously I’m not going to take daily saunas or catch wild game hens but I do love fresh, whole, clean ingredients. I’m not really worried about cleansing my internal organs of toxins but it WAS kind of cool to do her cleanse and feel miserable for a couple of days and then start feeling more energetic… followed by amazing… followed by I could eat like this forever!!!… followed by haha jk no I can’t but I might do that again someday.

“It’s All Good” has vegan and paleo recipes and even a whole section of recipes geared towards children (aka me). While there are also quite a few recipes that just didn’t look cost effective or seemed too time intensive for my purposes; all the easier, cheaper recipes I made were awesome.

Basically, I just think everything Gwyneth says is hilarious and I hope she’s not being serious when she says things but I also know she is. You shouldn’t write off her recipes just because she’s unnecessarily verbose about mundane ingredients–you should think of this as her version of pulling out her iPhone to snap an insta.

If you’re eating clean, vegan or paleo give her cookbook a go. It’s not gonna hurt anything to check that shit out from the library. It’s not like you’re paying for a ticket to one of her movies. Because that…I couldn’t endorse.

“We have great dinner parties at which everyone sits around talking about politics, history, art and literature—all this peppered with really funny jokes. But back in America, I was at a party and a girl looked at me and said, ‘Oh, my God! Are those Juicy jeans that you’re wearing?’ and I thought, I can’t stay here. I have to get back to Europe.” <—lol whuuuut? Me too, girl, me too.

(photo from the cookbook mentioned above and via here. 3 recipes from the book are also available via this link. : )

Buying Gwyneth Paltrow recommended ingredients is expensive but buying me a coffee is cheap. 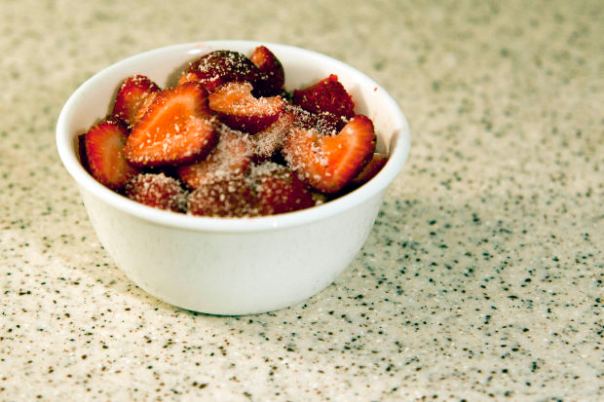 As a budget-livin’, wannabe foodie I try to eat produce seasonally (and when possible local). This means by the end of Winter I am less than excited by apples, pears and citrus. I cheated a bit and made these Strawberry Mini Toasts when my store put strawberries super on sale for Valentine’s day. I love making these in the summer for a light meal with a glass of wine. Having these in the midst of yet another snow storm was just the breath of fresh air I needed! Luckily, strawberries are the first fruit to ripen in spring and early summer so you can nom on these toasts all the time soon enough! This recipe also calls for basil which I can get fresh and locally year round. If you can’t, you can use dried basil or leave it off the top. : ) Enjoy!

a baguette, sliced, thrown on an oven rack for a few minutes if you like ’em crispy

Combine your sliced strawberries in a bowl with a tablespoon of sugar. Toss them a little and let them hang out for half an hour. Spread your preferred goat cheese on the baguette. Pile on some strawberries and drizzle balsamic vinegar all over. Top with basil ribbons and a few cracks of pepper.

Pair with a dry vignole and you’ve got a super simple dinner that feels kinda fancy. Just how this lazy, busy girl likes it! 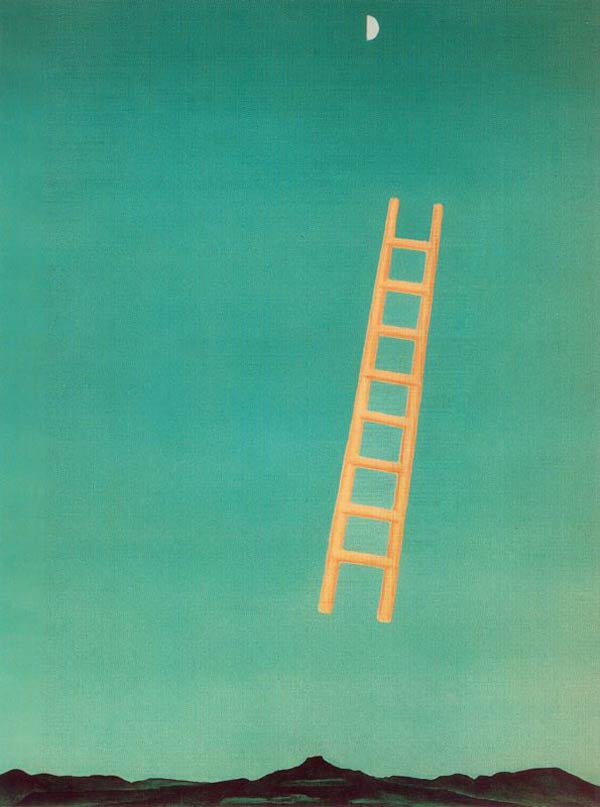 I’m not awesome at cooking and have never cooked my way through an entire cookbook in order to get awesome. I haven’t radically changed my diet to mirror neolithic, paleolithic or WWII times nor am I actively trying to shed pounds. I’m not training for anything. I don’t live in a gorgeous neighborhood in some hipster city or spend all my time going to concerts and flea markets. I’m not sartorially gifted. I haven’t taken any symposiums on HTML or photography.

I live in the real world. I have a full-time job and responsibilities and seasons of Netflix to watch. I don’t have time to do Pinterest projects every day of the week. I’m also kind of lazy and not independently wealthy. I like simplistic, sustainable approaches.

I feel like this “lazy girl” (read: simpler) approach to all of the above (learning, healthy living, cooking, discovering, decorating, dressing, business) is a voice lacking in the blogosphere. We all have busy lives, so why shouldn’t we focus on doing less in order to live more?  So, if you’re cool with this lazy girl’s commitment to life-long learning and search for the good life by way of an easier lifestyle then I think that’s what I can give ya. Some “smart laziness” if you will.

I really like the idea of maintaining a “lifestyle blog” for the breadth of editorial possibilities that can fall under the umbrella of “lifestyle.” But I’d like to highlight ways in which we can make our lives easier and happier. Cheaper and less stressful. I’d like to LEARN how to live a more thankful and productive life by writing about what’s working and what doesn’t instead of telling other people how to be. I’d like to share knowledge and books and adventures.

Basically, I just wanna write about the shit I wanna write about. Because I like to write and would love to get better. Because I want to have a greater purpose behind new tasks and research. Because I’m seeking a mental and creative outlet to supplement my day-to-day. Because sometimes I miss having an audience.

(Andddd….in total and COMPLETE transparency, if you’ve ever had any sort of online blogging presence and I know you even a little, I’ve probably read it because I’m a big internet stalking weirdo. So, I may as well return the favor and let you creep MY life for a change.)

I think that’s quite enough of the introductory, boring stuff. Let’s start the real fun tomorrow. : ) I’d like to devote Wednesdays to a mid-week round-up of links I’ve recently found and would like to share. So, check back tomorrow!